Painting Over the Rotten Spots in Your Story

So in 1977—when the house I’m squatting in was built—I was a geeky kid who wanted to join the circus. I spent hours walking acrobat style across the narrow tailgate section of my dad’s Dodge pick-up truck. I didn’t pay attention to what my dad had to do to keep our little house from falling down—I had more of a big tent in mind.

After spending a few quality hours painting the underneath part of my ancient deck, I think living in a tent might be easier. Part of the deck is built over a gigantic tree trunk—read: big spiders. Part stretches over a tall berm—leaving just enough room for a back-breaking hunker. I got so much paint in my hair I had to get it cut off.

I like to whine. The truth is, a dear friend came to help me paint and we knocked it out in a weekend. He graciously did most of the part involving spiders.

I found an olden-days pic of my house on the county tax site, where you can look up stuff like who won the quit claim in the divorce settlement and whether or not your neighbors paid their property tax.

The point is, some of the wood in my house is 36 years old and it’s showing its age. Maybe a responsible owner prior to me nailed down new deck boards once upon a time, but when we crawled in there to paint some of the boards had rotten spots.

(I’m having second thoughts about this post already, because most of my body parts are pushing the half-century mark, and I’m not sure I want someone poking into all my crevices unless it’s a cosmetic surgeon.)

Nonetheless I weighed my options:

A) Hire a nice person to replace all of the deck flooring with new wood or, better yet, composite that will last long after my last tooth falls out.

B) Replace some of the boards and sand down the others to remove the rot.

C) Slather gray paint over everything and call it good until someone—hopefully not me—falls through.

Of course being the responsible homeowner that I am, I opted for option C and vowed not to invite any lawyers or building inspectors home to dinner. Ever.

“The heavy duty primer we used halts the rot in its tracks,” I promised no one in particular. “It would sag before it actually broke. Plus, you can’t even tell when it’s painted over.” 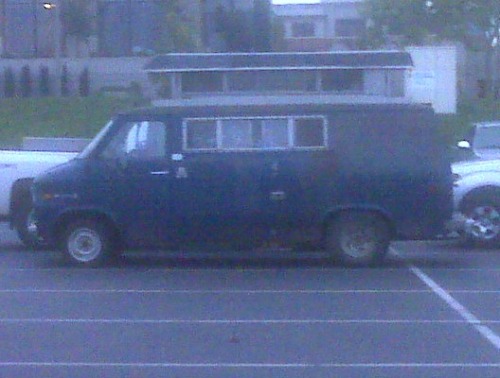 I’ve been working on a story off and on for three years. I started by writing it badly but enthusiastically, inspired by this awesome rig I saw parked in the grocery story lot. It takes a second to see it; someone carved out the top of the van roof and framed in part of a camper shell. I immediately knew what character of mine would do that.

My story is set in 1976, about the time the foundation to my house was poured. It’s about a guy who drives a backhoe and chases women.

It’s a pretty good story idea and the characters are fairly engaging, but the story has never fully satisfied.

I took a few fake revision passes, fixing lines here and there and taking some characters out and adding others in. I changed a gal’s name from Arleen to Charlene.

Wow, that really helped the plot.

I tightened the ending. I even did some real research on the kind of backhoe the character would use in his job—a Poclain, I decided. A European rig the job foreman got in a trade.

That is to say, instead of really finishing the story I tried to paint over the rotten spots.

And my readers always found them.

Of course they were right, because the character’s epiphany wasn’t fully earned. He made a choice at the end, but so what.

Painting my old deck, knowing that all the paint in the world isn’t a cure for bad wood, taught me a lesson. Oh I know I’ll have to replace the wood and I’ll get around to it, but meanwhile I’m ecstatic because I finally understand that for all his seemingly aimless wandering and woman chasing, what my character actually wants is to put down roots.

Dramatizing the attempts he somehow manages to undercut lend actual meaning to his choices. It’s the basic craft stuff we know, but applying it to a particular story I seem to have to re-learn it each time.

I used to think that crafting plot was my weak point, and I still struggle with that aspect with each new effort, but I’m starting to realize that figuring out character desire is even more challenging for me because it’s often painted over by behaviors that belie the true motivation.

I just gave this story to another round of readers. Their job is to look for the rotten spots.

I’m hoping they’ll say I finally replaced them all properly with good wood.

A more recent pic of my house with my Jeep I sold to buy a new roof. Not sure what I’ll sell to pay for deck wood–maybe a story!!

7 responses to “Painting Over the Rotten Spots in Your Story”