Now and then an awesome-o writer shares one of their projects with us, and this time it was the amazing Wendy Scheir, who introduced us to her stellar historical fiction. We invited Wendy to tell our readers about her experience working with an editing strategy dubbed the “Maypole Effect.” Here’s what she had to say:

Long story short, in 2012 I decided to write something fictional based on a real situation that took place during the winter of 1939-40, documented in materials I’d come across while working as an archivist on the records of the 1939-40 New York World’s Fair.

For two and a half years, I wrote five characters’ stories. They didn’t have a lot to do with one another, present-action-wise, but each occurred over that winter at the end of the Depression and on the cusp of World War II, and each circled around the same endeavor. I had a vague plan to weave them together, at some point. That would be easy. First, though, I needed to figure each character out independently of the others.

By mid-2015, it was time to weave. I broke each character’s story up into logical sections, interspersed them, and read it beginning to end. The result was a hot mess. The thing as a whole was utterly incomprehensible. There was no thing as a whole. The parts didn’t even add up to their sum. There was no book.

Thank goodness for computers. After a period of wallowing, I cut and pasted my fractured people back together again and placed the stories back to back. The interweaving disaster had exposed internal issues within each story, so I put the Big Structural Question out of mind and went back to work on those for awhile. But this wasn’t the book I’d envisioned. It wasn’t finished.

Trouble was, I had no idea what to do next.

My Squaw Valley pal Jilanne Hoffmann to the rescue! Jil led me to Laurel Leigh, a skilled editor who, Jil said, had a brilliant eye for Big Structural Questions. I dropped the manuscript onto Laurel’s e-doorstep and took a blessed break from writing.

November 2015. Just after Thanksgiving, Laurel came back with an idea. Actually she came with a ton, but I want to tell you about just one of them. She called it the Maypole.

Laurel saw in my characters’ stories a single overarching story with its own narrative momentum. The maypole design was a way to make the arc manifest. This insight offered not only a sensible way to order the book. It furnished me with a way to conceptualize, and construct, a unified whole out of a bunch of parts.

Now all I had to do was execute.

Which was when I realized I had no idea what a maypole looked like. So I Googled it. 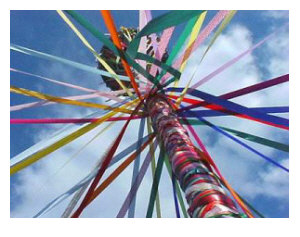 Pretty, right? If I was going to turn this design into a book, I needed to see what a textual version might look like. I created a maypole Word table with pleasantly-colored rows and began mapping out various possible juxtapositions and breaks. It was like a game, shuffling colored pieces around. This was fun!

Five months later I had woven the text into a rough interpretation of a maypole. (Less fun.) The result was interesting, but the characters still felt too broken up. Readers would lose the threads. I messed with my pleasantly colorful map some more, tried longer ribbons. Still not quite right, but closer. Finally I split the book into two parts, which led, eventually, to a realization of Laurel’s vision that worked. Not the Platonic ideal of a maypole, maybe, but absolutely it embodied the maypolic spirit.

Writing a novel can feel like squeezing and clawing, inch by inch, through a pitch black tunnel on your belly, terrified the whole time that you may not be headed for the air and light. With her insight, Laurel reached into that dark place and handed me a flashlight, a compass, and conferred upon me the conviction that I’d make it out alive. Let me tell you, it was sweet relief to have this companionship. I was deeply heartened. I was, still am, deeply grateful.

I’m not out of the tunnel yet. But I think I see the light.

From Laurel Leigh: Thanks for the kind words, Wendy! And let me say, it was fantastic to work with such a skilled, hardworking author. I was immediately drawn in by your work, and it was fun to come up with a strategy for how to approach structuring this book.

I grew up in a small town, and our grade school teachers put on a variety show each year, with the students as the stars. One year they taught us an intricate Maypole dance. It was madly fun, both to rehearse and perform on the actual day. Of course, I couldn’t know that the memory of dancing around a Maypole with my schoolmates would one day factor into envisioning a structure for Wendy’s marvelous stories. 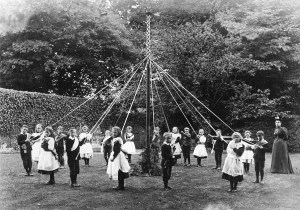 Image from April in Alabama

The concept of the Maypole is just what it sounds like, the idea being that a single dancer, or in Wendy’s case, one of her characters, launches the dance or story, performing solo until joined by a second member of the troupe. And then a third, and a fourth and so on. In the dance, this continues until all of the dancers are pirouetting around the tree to adorn it with ribbons. In Wendy’s case, that translated beautifully into allowing her stories to wind around each other without too soon overwhelming the reader with the multiple voices. Having them chime in gradually contributed to the building momentum of the overall story, while at the same time giving the reader an opportunity to become familiar with each character’s adventures en route, leaving it to a single character to finish up the tale. I might have come up with the general scheme, but then it was in the hands of this author to execute. I cannot begin to say how delighted and excited I was when she pulled it off in grand fashion.

I look forward to the day that Wendy’s stories are featured in a book. We haven’t talked here about her plot, since she’s just beginning to show the manuscript around, but trust me when I say you’ll want to be at the front of the line (after me), to buy your copy. 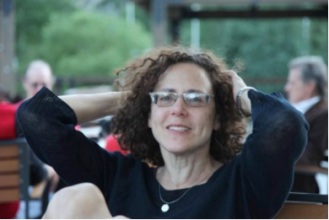 Wendy Scheir is director of Archives and Special Collections at The New School in New York City. She has written about institutional memory, historical exhibition, appraisal and archival finding aids, and churned out test prep manuals for the Princeton Review. She’s taught essay writing at NYU and creative writing at Putney School Summer Programs in Vermont. She’s been awarded scholarships to Squaw Valley Community of Writers four times—once for screenwriting, for a script that was twice a Sundance Screenwriters Lab finalist—the others for fiction. She has a BA in English Literature, an MFA in Filmmaking, and an MA in History/Archives (all from NYU). She lives in Yonkers overlooking the Hudson River with a great husband and an irascible mutt.