Living in the Great State of Lynch 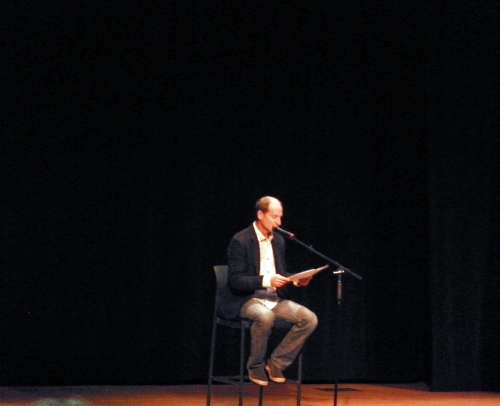 There’s a conversation that’s been heard a lot over the years in these parts—that being upper Western Washington, near the Canadian border:

“Did you like Border Songs or The Highest Tide best?”

Note that there are built-in assumptions hard-wired into the DNA of any denizen of this rainy realm: 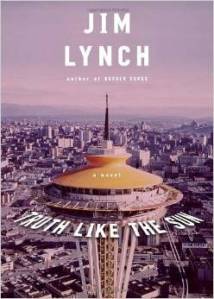 Since the publication of Jim’s third novel—yep, we call him “Jim,” because we feel like he is our author, in the sense that we live spittin’ distance from Border Songs’ setting on the Washington-Canadian border—the conversation widened to “Did you read/like/love Truth Like the Sun yet?” (There’s an awesome interview of Jim atop the Space Needle in Seattle.)

Occasionally, some unfortunate soul admits in the barest of whispers to not having read one of the trio, or, god simply forbid, any of them. Far less often, someone blurts out awkwardly that they haven’t actually heard of Western Washington’s equivalent of a duke, at which point we refrain from scolding them outright because our mother taught us to be polite, but someone won’t be able to resist saying something like, “Were you kept underneath the stairs until recently, like those people in that creepy Wes Craven movie?”

Setting foot inside these borders—above or below the “ditch”—and remaining uneducated about the life and times of Brandon Vanderkool or Mr. Seattle is akin to living in San Francisco and never having been to MoMo’s. Some things just can’t and shouldn’t be forgiven. Picking up on the below stairs theme, and to help break any awkward silence, someone will then say that Jim Lynch has been known to write in his basement, at which everyone will nod knowingly, regardless of whether they knew that or believed it, but it just seems right. That will lead to fragments of knowledge and/or myth people presume to know: 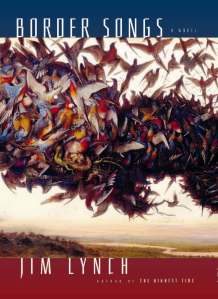 At any point, someone will inevitably yell, “Nineteen!” sending us all into peals of laughter, and god help the poor soul who doesn’t know and earns more pitying glances. There are inevitably a few showoffs in the party, who try to impress everyone by comparing Tom Robbins and Jim Lynch stylistically—well, we could compare snowflakes, too. It’s at least fair to say that both gentlemen dwell in the Pacific Northwest and have their own cult followings. Nonetheless, the comparisons often make for an extremely fun detour that can deteriorate to a lot of creative thumb waving and comparing to see who has the longest thumb—and there are also some overachievers who can name or have been to every locale used in the stories, sort of like this one woman I used to work with at the mental health center in Spokane who was an encyclopedia of Days of Our Lives and who could fill us all in on the lineage of relationships and feuds for the past decades of the show. This would occur during lunch in the quiet room, where we brought our lunch to eat and watched Days of Our Lives, and you guys don’t even begin to start laughing, because there were plenty of guys in that room who cared deeply about Bo and Hope.

The after story of Lynch’s characters is something we care about deeply. In a place where educated folks drop their g’s because they do, and socks and sandals make a weird kind of sense in the climate (having moved here from the SF Bay Area, I confidently double-dog dare you to resist more than three seasons), the zany ensemble of Lynch’s gives voice to the sort of experiences and issues that characterize us near-the-border dwellers and our frenemies to the north.

“Oh, I heard him say once at a reading that they might not,” someone answers.

Jim’s first two novels have been adapted for the stage (with film and TV versions in the works).  I felt special being in the audience up here that got to see Border Songs the play in the Claire vg Thomas Theatre just a few miles from the Canadian border—so cool! To top it off, the shapely female characters shed their tops, brazenly performing scenes in their colorful bras—in Lynden, people. We could barely contain our glee. OK, inside joke, for which I’d get a few dozen missiles shot my way, except doubtless everyone in that fair township was equally gleeful, because it was, after all, a tribute to Duke Lynch, who can get away with pretty much anything at this point.

Even writing a story set in the metropolis of Seattle.

Admittedly, up here near the border, we were the teensiest bit wary—would Brandon feel comfortable?—but we said, okay, we trust you, we’ll put on a  stylish pair of high-heeled boots and come with. Our author always has something worthwhile, hilarious, and naughty to teach us, and in Truth Like the Sun, he truly shows off his journalist background with the machinations among journalists and politicians and cross-cutting between the World’s Fair in 1962 and the dawn of the New Millenium. There’s a great interview of him talking about his approach and ideas about the book posted at Words with Writers.

Last month, Lynch was at the Chuckanut Writers Conference up here and taught a session called “How to Write a Novel You’d Love to Read.”

Jim Lynch offered writing craft advice to the lucky writers at this year’s Chuckanut Writers Conference in Bellingham, Washington. “I’m not a teacher,” he said, before beginning to teach us.

Maybe journalists make some of the best novelists, because they know how to learn a lot about a topic and relay it in a way that’s entertaining and understandable; they’ve written to deadline and know how to get words on the page; and they know how to stick with something and revise. As a novelist, he is essentially self-taught, explaining to us that his “writing group” consists of his favorite 75 books, housed in a shelf in his home office. After writing for a living, he turned to writing for a living—a huge switch in some regards and maybe not such a major one all in all.

Ha ha, again, because we live here or traveled from Seattle or somewhere for the writers’ conference, we got a sneak preview of his latest project, Before the Wind, at the conference faculty reading. Now we all can’t wait, and because there’s gonna be boats, you just know there’s a group of us trying to learn how to sail—although you’re either good at it or you’re not, we all know that, of course.

It is a truth that wherever on land or water Lynch’s merry band leads us next, we will go. He is our Pied Piper, and you never saw a happier bunch of followers. Admittedly, we have had to learn to share. Lynch’s books are read and lauded worldwide. So the next time we see you up this way, we can all go look for violet-green swallows together on the way to our sailing lesson.

Tagged as Before the Wind, Border Songs, Canadian Border, Jim Lynch, The Highest Tide, Truth Like the Sun

4 responses to “Living in the Great State of Lynch”